During February 2004, the Jazz Junction Show featured the Music and History of Black Musicians who have made a mark on the jazz world. Some of the featured artists included Count Basie, Louis Armstrong, Duke Ellington, Philly Joe Jones and Art Blakey. The London Free Press published an article about Black History Month and though the courtesy of that newspaper we have reprinted it here for you to enjoy as well as a picture of Al Burton and Barbara Carter that was included with it. 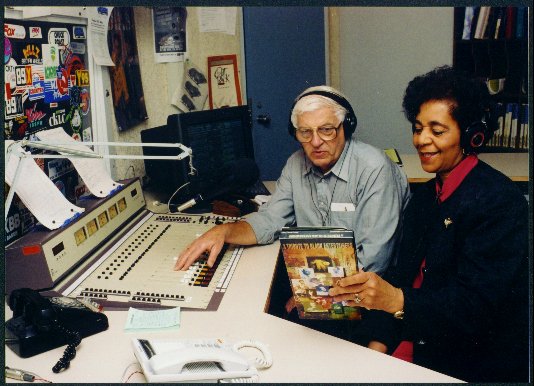 Al Burton, president of the London Jazz Society, and Barbara Carter, supervisor of Uncle Tom's Cabin in Dresden, spent time in a control room at Fanshawe College's 106.9 FM radio station taping a show for Black History Month, which begins today and runs through February. The twosome examine black entertainers, some of whom will be featured on the program. Photo George Blumson, London Free Press. Reprint from February 2004.

The London Jazz Society has organized a series
of radio programs for Black History Month.

Radio lovers will be able to follow a a special investigation of the past against a musical backdrop this month. To celebrate Black History Month. the London Jazz Society is using its regular February time slots on CIXX-FM to feature gueat hosts and local black historians. The idea is o trace the contributions of black culture, in particular musicians, to Southwestern Ontario. This is the first time the society has tied its programming to black history for an entire month. "It's time to acknowledge the debt we have to black entertainers," says Al Burton, president of the Jazz Society. "The number of black musicians to contribute to jazz from the very beginning can't be denied."

Historians from the Chatham area will also be discussing on air the region's black history as it developed through the settlement of ex-slaves. Organizers believe the importance of black history in Ontario is frequently overshadowed by the American experience. "There's not much concern given as it should be," says Barbara Carter, supervisor of Uncle Tom's Cabin in Dresden.

Also involved in the project are Gwen Robinson, author of Seek The Truth, a reference book detailing the history of the Buxton settlement, and Alice Newby, curator of Centennial Meseum in Raleigh Township. All three experts welcome the opportunity to reinforce black heritage. "The older generation wanted to forget our heritage because it was too painful," Carter says. "But my generation wanted to dig into their rich heritage and be able to speak of it proudly."

Robinson's book profiles prominent blacks from the Chatham area including Baseball Hall of Famer pitcher Ferguson Jenkins. She tells the story of how slaves crossed the borders at Niagara and Windsor before settling in Buxton, which was inland and away from the slave catcher. At one point, Chatham was at least half black and a black alderman was elected as early as 1890, Robinson notes. "People are amazed that Chatham had a black alderman before now." she adds.

A white minister from Ireland, William King, founded Buxton, a community south of Chatham that was settled by escaped slaves and their families in the mid-19th century. King encouraged slaves from America to begin a new life there. He started a school and within a year whites were attending because of the quality of education. "Anytime I can tell the Buxton story and talk about black history, I love it," says Newby.

Carter is the great-great grand-daughter of Josiah Henson, who lived in Dresden after escaping 41 years of slavery in 1830 via the underground railroad. Henson started the British American Institute to educate ex-slaves and foster their feelings of independence. "Josiah used to say that he went to the university of adversity." says Carter. The Jazz Society's month-long series will feature nine hosts and 29 hours of music and black history.


Back to Top | Jazz Society Home